50 Great Horse Names for Your Steed

Working with pets on TV sets is definitely challenging, but it pays off. Animals can instantly infuse levity or emotion into a scene. In fact, their mere presence is a surefire way to delight the audience.

There’s something about the pure innocence of an animal that will make even the most cynical of hearts melt.

Whether we’re talking about fluffy doggos, snarky cats, or mischievous monkeys, animals have proven to be a worthy addition to an impressive number of TV series.

Trusted sidekicks or, on some occasions, charming main players, they steal the spotlight and can be relied on for endless shenanigans.

We’re sure everyone has their favorite TV pet, but do you know anything about the animal tasked with portraying it?

Get ready for an inside scoop.

Here are some of the most popular television pets that were snubbed for an Emmy.

Arguably the most famous TV dog of all time, the character Lassie was first created by Eric Knight. The female Rough Collie appeared in several movies before making her small screen debut in 1954, on the TV show of the same name. The series follows the dog’s adventures in a small farming community, alongside her human and animal companions. It ran for 19 seasons, until 1973.

Several dog actors portrayed Lassie during her TV stint, but the most famous remains Pal, who played Lassie in the movies and appeared in the pilot episodes for the series.

Born in 1940, he was a male Rough Collie performer that retired shortly after filming for the pilots ended. His gender almost cost him the role of a lifetime, but the producers were so impressed with his performance that they decide to cast him anyway (1). He passed away in 1958, following a lucrative and successful career.

Having a pet dolphin sounds like fun, which is the entire premise of the Flipper TV show. The series, which ran from 1964 to 1967, focused on Ranger Porter Ricks, his two sons, and their adorable dolphin, Flipper. Highly intelligent, Flipper assists the ranger with rescues and even looks after the kids.

Over the course of the series, five dolphins portrayed Flipper–all female. Turns out, they’re easier to work with than their male counterparts. However, one male was indeed brought in, but only for the infamous tail walk (2). The five females were Kathy, Susie, Patty, Scotty, and Squirt.

Kathy has the most screen time and, unfortunately, her story doesn’t end well. Once the show wrapped, she was moved to a small tank at the Miami Seaquarium. Ric O’Barry, who trained all five dolphins for the series, is sure that she committed suicide due to being depressed. The dolphin died in his arms in 1970 (3).

Kelsey Grammer may have won four Emmys for portraying the titular character on popular sitcom Frasier, but Eddie the dog surely deserves some praise for stealing the hearts of so many of the show’s fans.

The series ran for 11 seasons, from 1993 to 2004, and centered on the psychiatrist building a new life as a radio advice show host in Seattle. Eddie was the dog of Frasier’s dad and he was mainly known for his uncanny ability to stare.

On the show, Eddie was portrayed primarily by Moose, a spunky Jack Russell Terrier. He was cast after only six months of training and enjoyed quite a few perks for being a good boy – including magazine spreads and his own “autobiography,” My Life as a Dog (4).

His undeniable talent might be what made some of his cast mates, however, treat him with a tiny bit of animosity.

“I love dogs. I don’t have any particular feeling about that dog because I just work with him. It takes twice as long to finish a show when the dog’s in it,” Grammer once told The Washington Post (5).

After Moose retired, the role of Eddie went to Enzo, one of Moose’s sons. Sadly, Moose passed away in June 2006, at the age of 15. He died from natural causes.

Salem from Sabrina the Teenage Witch

Based on the Archie comics, Sabrina the Teenage Witch ran for seven seasons, from 1996 to 2003, to great success. We’re not suggesting that most of that success was due to Salem, Sabrina’s magical talking cat, but we bet that a lot of fans enjoyed the sarcastic feline’s involvement.

Sure, Salem was technically a former witch forced to spend a century in cat form but that didn’t make him any less cuddly.

However, the show’s creators were big supporters of animal rights, so most of the scenes involving Salem featured an animatronic model voiced by Nick Bakay. For the non-dialogue scenes, Salem was portrayed by four trained cats: Elvis, Lucy, Salem, and Witch.

Fun fact: Kiernan Shipka, who plays Sabrina in the reboot, actually discovered that she was allergic to cats following her time spent with Salem. (6)

Needless to say, he is not her favorite co-star.

During its 11-season run, from 1996 to 2007, 7th Heaven was one of the most positive, feel-good shows around. The series centered on Reverend Eric Camden, his wife Annie, and their seven children. Their house was always full, with one of the most charming residents being the family dog, Happy.

Happy was portrayed by a dog also named Happy, one of the only actors to appear in all 243 episodes of the series. Happy was a female mixed terrier that was rescued from a California animal shelter. She passed away back in 2010, at the venerable age of 15. (7)

Several animals graced the screen during Friends’ iconic ten-year run, from 1994 to 2004. There were the chick and duck, Chandler and Joey’s roommates; Mike’s family dog, Chappy; Rachel’s sphynx cat, Mrs. Whiskerson; and Julio, the cat Phoebe believed to be her reincarnated mom.

That’s just to only name a few…

But one of the stars of the show, at least in Season 1, was undoubtedly Ross’s Capuchin monkey, Marcel.

Marcel had quite the personality from blasting The Lion Sleeps Tonight on a loop, to ignoring Ross when in public and eventually humping everything in sight. Unfortunately, this made Ross have to give him up to a zoo where Marcel could have constant access to companions.

Which, turns out, was a relief for David Schwimmer, who played Ross on the show.

Marcel was played by a white-headed Capuchin monkey named Katie who went on to build an impressive career, and is still committed to the trade today. She has appeared in The Loop, 30 Rock, and numerous commercials. Not only that, but Katie was recently cast in the upcoming adaptation of Brian K. Vaughan’s graphic novel Y: The Last Man (9).

Her return to TV is imminent.

As Katie is in her late twenties, she still has several good acting years ahead. According to her trainer, Capuchin monkeys can live to see their 40s.

Gilmore Girls originally ran from 2000 to 2007, but enjoyed a highly-anticipated Netflix reboot which dropped on the streaming service in 2016. The series centered on the very close relationship between a young mother, Lorelai, and her daughter, Rory.

The two got along great, except for a brief period in Season 6, when they spent several episodes apart, actively avoiding each other. Needless to say, fans weren’t particularly pleased with that development.

The one good thing to come from that period of estrangement was Paul Anka the dog. He appeared during the final two seasons of the series and reprised his role for the Netflix revival.

Paul Anka was portrayed by dog-actor Sparky, a Polish Lowland Sheepdog. Lauren Graham, who plays Lorelai, was excited to have the pooch back on set and seemed to enjoy working with him.

Murray from Mad About You

Mad About You was a hit sitcom that ran from 1992 to 1999. It starred Paul Reiser and Helen Hunt as a married couple.

The two had a dog, Murray, who often crashed into the bedroom wall and had an overall dopey and adorable demeanor. A popular addition to the family, at least as far as the audience was concerned.

Murray was portrayed by Maui, a collie mix. He was originally found in an animal shelter in Hollywood and went on to have his big break on Mad About You after appearing in TV commercials and as backup for the top dog in the film Bingo. According to his trainer, Maui was very spoiled on set and took direction well. (11)

Vincent may not have been a central figure on Lost, especially with everything else going on. However, no one can deny that his soothing presence was a godsend for most of the castaways.

The show, which ran from 2004 to 2010, followed a group of plane crash survivors as they struggled to discover the secrets of the mysterious island that became their new home.

Given it’s a J.J. Abrams project, that’s an oversimplification of the plot…

Vincent was portrayed by Madison, a female Labrador Retriever. Before starring on Lost, she worked as a tracking dog and obedience competitor. She had a fondness for tennis balls and apparently enjoyed being on set, as she warmed up to everyone. (12)

Which was probably no easy feat, especially with polar bears around.

If you’d like to make your pet unforgettable, you might already be in luck if they have a unique or crazy name. See for yourself down below! 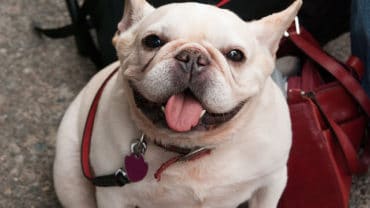